Due to an injury, the stallion traded his sportcareer into fulltime breeding. He has young, but very promising pedigree such as:

The dam, Scarlet van de Pereboom, is a young mare who came to our stables via the BWFA foal auction of 2018. The co-owners are Stijn Stevens and Seacoast Stables.

Scarlet's sire is Comme Il faut, one of the most wanted modern bloodlines. Comme Il Faut unites the world’s very best jumping horse bloodlines in one horse. The bay stallion is the son of two legendary jumping horses: Cornet Obolensky and double Olympic champion Ratina Z. No introduction is necessary for either of the parents. Their performances are imprinted on the mind’s eye of all showjumping sport fans.

Comme Il Faut stands out thanks to his jumping technique, ability and power. Ridden by Peppi Dahlman, the stallion was Reserve Bundeskampioen and Reserve World Champion of the young jumping horses in Lanaken. In 2013 Marcus Ehning took over the ride on Comme Il Faut and within a year was successfully competing him at five-star level, with subsequent top rankings in Grand Prix and World Cups as a result.

Wasabi's 2nd dam, Nauwsika van de Pereboom, jumps 1m45 level with Bart Anthonissen. She is the full sister of Gunder, who is jumping at the highest level (1m60) in Qatar. 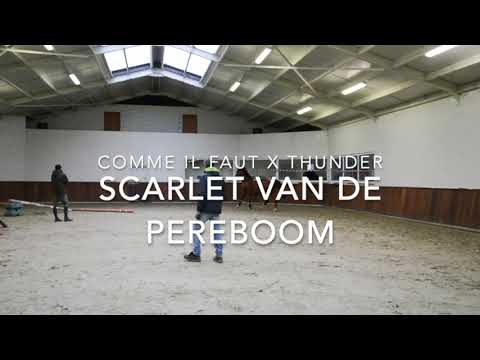